I want to repeat a statistic I use in every talk: by 2040 or so, 70 percent of Americans will live in 15 states. Meaning 30 percent will choose 70 senators. And the 30% will be older, whiter, more rural, more male than the 70 percent. Unsettling to say the least https://t.co/EGPD5nE4qG

and it reminded me of similar discussions I have had in which I was taking a similar position. I know that the point of the Senate was to ensure that states with large and small populations were on equal footing in one of the houses of the legislature. However, it seems to me that at some point the imbalance in population size between states may outweigh the desire for numerical equality. Has the degree of inequality in Senate representation grown over time? I will leave the more intersting question about differential demographics for another post.

Since the data are readily available, I decided to look into things to decide how strongly I should argue this point in the future.

The National Historic Geographic Information System contains a wealth of data from the Census over time in a standardized, customizable download extracts. To make things simple, I chose to download total population figures by state from Decennial Censuses back to 1790.

Since the number of Senators per state is constant across states and over time, the question boils down to one of changing population over time. The best way I can think of to answer this question is to look at summary measures of inequality that describe distributions. A suite of these measures are available in the ineq package–instead of income or wealth distributions, we will be looking at population distributions. See the help files (?ineq::ineq) for descriptions of what each of the measures is and for the relevant citations. 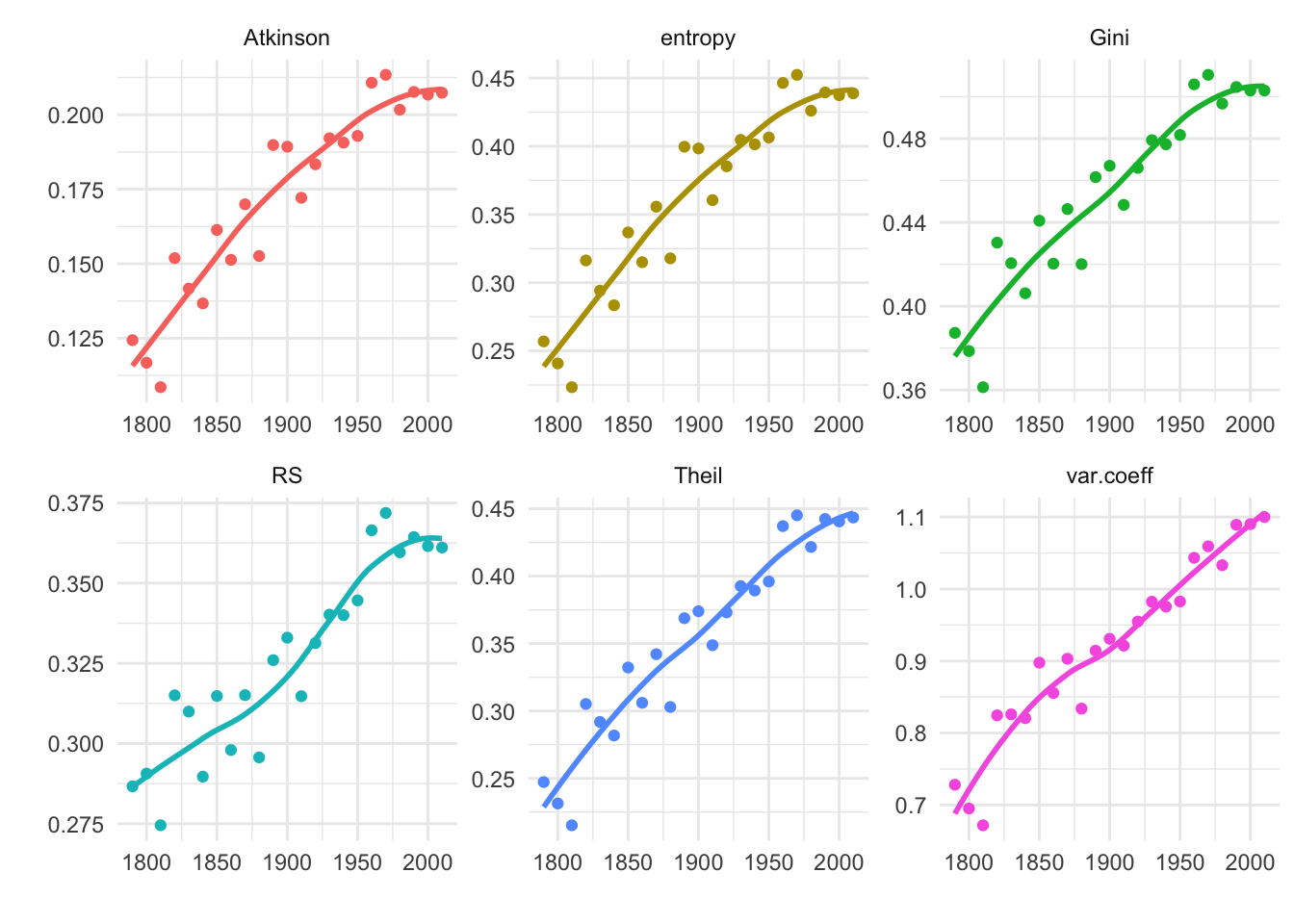 The scale of each of the metrics is irrelevant; the point is that each shows a consistent and fairly linear increase over the history of the United States. The obvious conclusion is that as the US has expanded its territory and grown in population, its population has also become relatively more concentrated across states.

Another way to look at this issue is to examine the cumulative distribution of state populations over time, or the Lorenz curves of share of population on the y-axis and share of senators on the x-axis. In lieu of 23 separate plots, an interactive, plotly version is below. For reference, I have also included the value of the popular Gini coefficient for that year. The red line is represents what the distribution would look like if each state had an equal share of the total population. The farther the black curve is from the red line, the more unequally population is distributed across states.

This post doesn’t fully address the implications of @NormOrnstein’s point: I don’t do any forecasting and don’t disaggregate anything by race or other predictors of party identification, but I think it is interesting to think about whether and at what point the reality of where people live overcome whatever benefits may have come from a legislative body that divides power equally across arbitrarily chosen geographic divisions. At what point does this violate the basic one person, one vote premise of democracy?

Carl is a sociologist turned education researcher in Wisconsin who takes a bit too much joy in the minutiae of statistical programming.

Happy to have my R-related posts aggregated on https://www.r-bloggers.com/